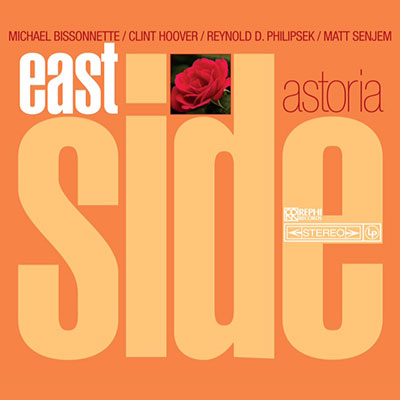 Astoria (by East Side)

Reynold Philipsek (guitar) and Clint Hoover (chromatic harmonica) are separated by nearly 900 hundred miles or more with Clint living in Pittsburgh and Reynold living in Minneapolis but the symbiotic and sympathetic relationship they established over the past few years since their first recording together is enduring.

Their group, East Side (with Michael Bissonnette on percussion and Matt Senjem on bass), still play a schedule of shows each year and manages to continue to record, hence their newest effort East Sideâ€™s â€œAstoria.â€

The idea of the East Side quartet was conceived in late 2008 and in early 2009, they recorded the first album. The stylistic basis for the group was combining elements from Blue Note era “soul jazz” and their conception of Nuevo Tango. The group clicked musically and personally and all four members got along from the start. The audience approved as well and it looked like they were all set for a long run.

Circumstances however intervened and by 2011 Clint had moved from Minneapolis to Pittsburgh. Still, they were determined to keep East Side going somehow. As things worked out the entire quartet convenes for a handful of shows each year and East Side is here to stay.

It took them about three years to complete Astoria (their second album) but they were determined to get it done. The result is this recording which is a great follow up to the first effort and an apt document of the group’s development. It is their goal to continue this musical endeavor for some time to come. The album features four compositions by Reynold, two by Clint and one classic cover.